The Stone Wētā by award-winning New Zealand author Octavia Cade (who also has a PhD in science communication) is a deep, thoughtful, and thrilling science fiction novel set in what feels like a not too distant future. In this future (which actually seems much too probable and familiar), powerful governments and corporations are doing their utmost to ignore and suppress the science concerning climate change and its impact on the eco-systems across the globe. Even as the world’s climate is clearly changing–ravaging countries and causing suffering for both humans and wildlife–these forces use whatever means are at their disposal, including violence, to silence debate, stifle research, and obliterate the scientific evidence. 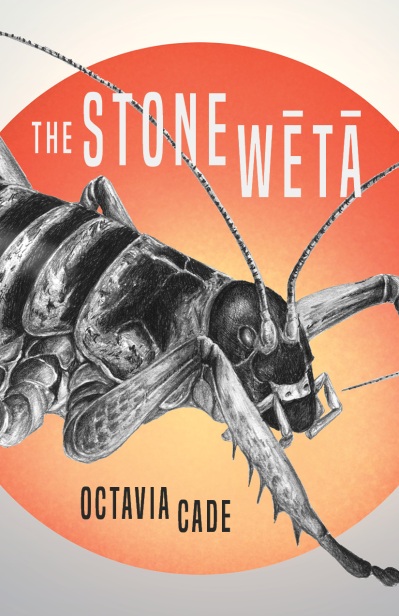 The official blurb from the publisher:

With governments denying climate science, scientists from affected countries and organisations are forced to traffic data to ensure the preservation of research that could in turn preserve the world. From Antarctica, to the Chihuahuan Desert, to the International Space Station, a fragile network forms. A web of knowledge. Secret. But not secret enough.

When the cold war of data preservation turns bloody – and then explosive – an underground network of scientists, all working in isolation, must decide how much they are willing to risk for the truth. For themselves, their colleagues, and their future.

Murder on Antarctic ice. A university lecturer’s car, found abandoned on a desert road. And the first crewed mission to colonise Mars, isolated and vulnerable in the depths of space.

How far would you go to save the world?

I read and loved Cade’s short story “The Stone Wētā“, published in Clarkesworld in 2017. (According to the author, this short story does not spoil what happens in the novel, and can be considered the first chapter of the book.) The book takes the concept of the short story, and expands on it while maintaining its style and tension.

In the book, we follow several scientists working all over the world (and even off-world), who are all part of a secret network. Their mission: to gather, share, and hide scientific data and research concerning climate change. With members working in Antarctica and Japan, the US and Africa, and beyond, the scientists are rarely aware of the identities of the network’s other members, in order to stay safe from their powerful enemies.

The scientists in the secret network are all named after a specific animal or plant–the Stone Wētā, the Antarctic Lichen, the Bristlecone Pine, and so on–and one of the things I love about this story is how Cade intertwines the facts and descriptions about each creature with the situation and traits of each person: how they hide, how they defend themselves, how they survive, and, sometimes, how they attack.

Each chapter in the book switches between characters, and in the process, each individual contributes their pieces to the mosaic of the novel. This might make the book feel somewhat episodic at times, but I found it an effective and compelling way to tell this particular story. Cade skillfully uses the changes in perspective to increase the tension and the sense of growing danger and desperation each character experiences. Switching between the characters also puts the focus on a vital element of the story–how both scientific research and political resistance require cooperation and teamwork, and how they might function under difficult and dangerous conditions.

As the book progresses, we come to realize that the situation for the scientists in the secret network is becoming ever more precarious. Powerful forces are working hard to uncover their identities, quash their research, destroy their data, and maybe even kill them off. The members of the network must try to stay alive as some of the members disappear, and some barely survive serious attempts on their lives.

The Stone Wētā is a sharp and bold book about climate change and the vital importance of science to understand climate change and, maybe, reduce its impact. It’s also a book about the importance of cooperation. In the story, Cade shows us teams and groups of scientists working together to gather data and hone their ideas. In a broader social context, teamwork and cooperation are also shown to be vitally important in order to mount a successful resistance to counteract the oppression by corporations and governments.

The Stone Wētā feels like an important and urgent read in today’s world. It is also a compelling and intricately crafted piece of science fiction. Whatever hope there is for Earth and humanity, this book says to me, depends on people, as individuals and in communities and networks, and whether they will be able and willing to stand their ground and even (if required) sacrifice their own safety and comfort for the greater good. As the Antarctic Lichen ponders in the story:

“If we’d done better then we wouldn’t have to hide now.” If they’d worked harder to keep politicians out of power who didn’t understand science and didn’t want to, politicians beholden to special interests….who’d gut environmental regulations and research funding, stifle information, do their best to promote a compliant citizenry.

It’s a dark vision of the future, but Cade’s story also offers hope and inspiration, and that is sorely needed these days.

The Stone Wētā is forthcoming in April from Paper Road Press.

1 thought on “Book review: THE STONE WĒTĀ by Octavia Cade”