If you’re so inclined, you can support me on Patreon, KoFi, and at Curious Fictions. 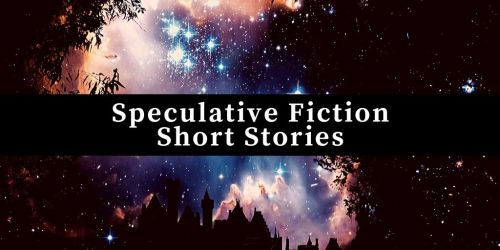 Small Evil, by Aeryn Rudel in The Arcanist

“I appear in the middle of a crudely drawn pentagram, the energy of a weak containment spell crawling across my skin like a thousand tiny spiders.”

I love this wickedly funny story of a summoned demon, especially because it is told from the point of view of the demon (and it’s a very snarky and salty demon at that!). There’s a great sense of bloody-minded humour mixed with bloody-minded horror here, and the way Rudel plays around with pop-culture references and horror tropes makes the story even better.

An Irrational Love, by Marika Bailey in Fiyah #12

“I. In the beginning, there was darkness, and she was infinite.
Ayo doesn’t believe in praying, but she will do it today. It is a holy day, and she has been given a part in it. Stillness comes, the moment the gods remind the world of their gift by taking it away. That’s the kind of bullshit gods do. A foot to your neck to remind you who’s in charge.”

Bailey’s novelette about the fate of Princess Ayo and the dark secrets and great power hidden in her family’s history, is part of a brilliant issue of Fiyah. This is a strikingly rich, strange, and wonderful tale that intertwines fantasy and myth (for example, strands of the mythology surrounding the Minotaur and Ariadne are incorporated), and the result is something both harrowing and beautiful. If you, like me, love intricately woven tales that blend bold new perspectives and characters with the familiarity of ancient lore and myth, then this tale is definitely for you.

“My handwriting was appalling even before I became an amorphous apparition, so I should probably not be surprised that the words came out as a mess of bloody fingerprints. I would apologize to the janitor if I still had a voice.”

This is both a ghost story and a love story, and it broke my heart as I read it. Jansen tells this devastating tale with a quiet, matter-of-fact voice that also incorporates a dark sense of humour. There is so much emotion is buried in every sentence and paragraph. Gorgeous and ghostly and gripping.

The Haunting of 13 Olúwo Street, by Suyi Davies Okungbowa in Fireside

“But you don’t really know anything about being haunted, do you?
You’re thinking about this all wrong. You think that if you grabbed the doorknob to my pantry, you’d feel a warm, thick ichor, and if you held it up to the light, you’d see the ichor runs the spectrum anywhere from crimson to black, and drips slowly, never quickly.”

If you love haunted house stories (who doesn’t?), this beautifully written and thoroughly original tale is a must-read. It’s told from the point of view of the haunted house itself, and it is both atmospheric and deeply moving.

Necessary Cuts by Bryan Miller in The Drabblecast

“The manuscripts I read are haunted. Commas vanish forever into the void. Subjects and verbs struggle in bloody disagreement. Infinitives are cleaved with a dull axe. Sentence fragments, ablated at one ragged end, lay strewn between the margins.”

If you want to listen to (or read) something haunting and dark and fiendishly strange , this story from The Drabblecast will do the trick. An editor receives a very strange manuscript, and as he edits the words, the world starts to change…and so does he. It’s an unsettling, disturbing story that sneaks up on you and becomes progressively more and more screwed up until the end when everything is bone-chilling terror.

Windrose in Scarlet by Isabel Yap in Lightspeed

“Beauty finds the crumpled girl at the perimeter of the chateau: covered in clotted blood, dark against her bright red hood. Her eyes are half-open, cloudy like a corpse’s, but her chest shudders when Beauty puts her ear against it.”

If you’ve followed me on social media for a while, you probably know that I am in love, and a bit obsessed with, re-tellings of Little Red Riding Hood. I love fairytale retellings in general, and that is my favourite fairytale. In this Lightspeed story, Yap does something  wonderful: she knits together two fairytales – Beauty and the Beast, and Little Red Riding Hood. The result is a re-telling that is both tender and fierce, as it deals with love and power, domestic violence and loneliness, and how we often do what’s expected of us, diminishing ourselves and our power to become what others want us to be. As Yap shows in her story, breaking those bonds is neither easy nor safe, but sometimes we have to try in order to gain our freedom and stay alive.

Frankincense and Myrrh, by Megan Arkenberg in Kaleidotrope

“On a winter day nearly thirty-three years ago, my husband saw a god.
He has not told the full tale to anyone, not even to me, although I know more than most. I know about the long journey in the light of a single unwavering star—first alone, then with Caspar, and finally with beautiful, mysterious Balthazar, barely twenty years old and already so wise in the ways of suffering.”

A melancholy, beautifully written tale about a life lived in the shadows of the birth of Jesus. It’s told by the wife of Melchior, one of the three wise men. Melchior’s entire life, and the life of his wife, have been shaped by what he saw thirty-three years ago when he followed a star to meet a baby born in a stable. Now, he’s leaving again, because he’s seen a god’s death in the stars. A lyrical gem.

The Chopsticks Wizard by Anya Ow in Kaleidotrope

““So how does yours work?” Liling asked, ignoring Ren. “Never heard of a bamboo practitioner before. The iron guy could turn blades. Didn’t work with flint arrows, so he died. So much for his airs. Funny story.”
“It’s an affinity, woman,” Liyang said, before Meihua could comment. “You affect things of your affinity type. Turning them, heating them up, shattering them—”
“I know what it means. I meant her. You. What can you do, bamboo wizard?” Liling asked.”

A prince is hunting for a magic beast called a qilin, and Meihua, who wields an unusual kind of magic tied to bamboo, joins the hunting party to assist in the hunt. I love the gentle tone of this story, even in the midst of the death and mayhem, and I love the exquisite and wonderfully detailed world-building that goes into it without ever weighing down the story. There’s a lot going on beneath the surface here as the story deals with personal relationships, family dynamics, and the deeper meaning and impact of magic on the world, all of it adding to the depth and lustrous texture of this wonderful story.

“Mr. Buttons would know what to do. He always did. He’d been right about Taylor’s dad, who had a new family now. And about Liam, his best friend who wouldn’t talk to him anymore.”

Pinckard tells a brilliant and terrifying horror story in less than 1,000 words, and oh boy, this one will stick with me for a while. Imagine a really twisted take on Toy Story, and you’re partway there. I really like how Pinckard lures you in, and then slams the hammer down at the end. Masterfully done.

The Butcher, the Baker, by Mike Allen in Beneath Ceaseless Skies

“Trukos didn’t even know the man’s name. He had known the names of the first two men he killed, evil souls who had deserved worse than he gave them—Mayya had told him as much. This man, hot tempered and foolish, had gambled grossly and lost, but did he deserve this death? Trukos would never be sure.”

Mike Allen’s dark fantasy story is unsettling and harrowing. Trukos is not a regular man. He was made by the baker Mayya, and whatever life he has, whatever actions he has taken, whatever murders he has committed since he was born from her oven, have been guided by her. But when Trukos kills a man he was not ordered to kill, and gets stabbed by a rather wicked dagger in the process, everything changes, including the magic that has bound him to Mayya. This is a wrenching story about obedience and free will, and what to do with the powers we have, and the life we’re given.

“On nights where even the stars hide behind cloaks of cloud, and their big sister the moon can’t bear to share her light–on these rare nights, death prowls in the form of a black wolf.”

A gorgeous, lyrical tale about a wolf, a Dark Moon night, the Fairy Queen, and the kind of love that makes you risk everything to win your heart’s desire. It’s a tale of desperation, transformation, and love, and the ending just about broke my heart.

The Red Cloak, by Vanessa Fogg in Truancy Magazine

“My red cloak is made of softest wool and is bright as berries, bright as blood. Wearing it as I cross the barren field, I glow against the snow and leafless twigs, the tangles of sticks poking up from the ground. Sparrows and thrushes dive at me, as though to peck at a bush of winter berries.”

It was obviously my lucky month, with two amazing re-tellings of Little Red Riding Hood to read. Vanessa Fogg puts a sharp-edged new spin on the fairy-tale here, approaching  the story from a new angle and making us see the creatures and people in it in a new light. Who would expect a child to brave the woods and its dangers — wolf and otherwise — alone? What kind of mother would send her child there? And what kind of grandmother awaits her in that cottage? There’s a real emotional depth and resonance here that I love.

“Selfless“, by James Patrick Kelly in Asimov’s November/December 2019
Joseph Jirasek does not exist. He was “taken”, and fundamentally altered — when he was thirteen years old. The man who once was Joseph still lives, but he is only pretending to be Joseph. In truth he has no sense of self at all, instead, he assumes various selves, depending on what the situation requires, acting out the expected roles of Father, Husband, Boss, or (most dangerous of all) Hunter. The Hunter has only one desire: to “take” others and alter them as he was altered. After a confrontation with his mother, Joseph has an encounter that overthrows everything he thought he knew about himself and what was done to him. “Selfless” is a fantastic mind trip and a disquieting read that got right under my skin. (You can also hear Kelly narrate this story in a podcast version of “Selfless”.)

Pigshit and Gold, by Aiki Flinthart in Dimension 6 #18

“Grandy scratched at the dark burgundy, triangular head and the drake made a curious, purring noise. ‘But she’s quite tame, I assure you.’ — ‘Hasn’t burned anyone for….oh….at least six months.”

I adore this fantasy tale for its sense of dark humour, for the gritty and uniquely imagined world-building, and for the twist built into it. Lady Vemra, a rather selfish and unpleasant woman, has gone to find the legendary Haldora the Archer to help turn the tide in a battle between two nobles. Vemra’s real motivation is to gain the favour of one of the combatants AND get herself out of debt in the process. Vemra drags the young archer Dora, and an insistent and brassy old woman calling herself Grandy, along to the frontline, but what happens when they finally meet up with Lady Fantine is not exactly what Vemra had in mind…

1 thought on “14 excellent stories I read in October”