My latest story for the Word Count Podcast was based on the picture story prompt below. I started writing a very different story than this one, but the news headlines about children in cages were on my mind, and eventually, another story came to me.

Sometimes, I might write a story just to get the rage out of my head. 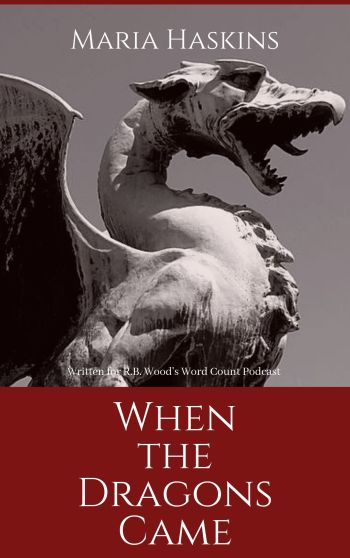 When the Dragons Came

Every morning, I walk through my garden of statues up here on the cliff, while the air is still cool and scented with sea and jasmine. The statues are only shadows yet, melting into the blue dusk before dawn. But I know their shapes anyway, because I made them all.

Walking here, I think about the old days, before I made my home here. Before I became a sculptor of rock and stone. Before there were dragons.

Before the dragons, there was the Sorcerer. He ruled this land for years uncounted spreading his malice and cruelty. People said he was getting old, losing his power, but no one ever stood against him.

My earliest memories are from the Sorcerer’s dungeon. I was taken when I was just a small child and imprisoned for years. I wasn’t alone. There were hundreds, thousands of children, imprisoned in that place. Like me, some were gleaned from orphanages. Others were stolen from the poor or abducted off the streets. We were crowded into cells, with barely enough room to move, sleeping on the cold stone floor, being fed whenever the guards remembered us, drinking fetid water when it was offered.

I remember the dirt and stink of our bodies. I remember babies crying for mothers who could not hear them, toddlers screaming for food and comfort, small hands reaching between the bars for someone to hold them. I remember myself, small and thin, my body and mind crumpling in the grip of horror and darkness.

Someone will free us, we told each other in the beginning. But no one ever came for us.

We didn’t know why the sorcerer imprisoned us. The guards said we or our parents had broken some arcane law, but there were other stories in the dungeon. Stories about how the Sorcerer would sacrifice us in demonic fires. Feed us to beasts. Summon dragons to devour us.

I thought of flames and fangs and claws, and I was afraid.

Soon, I dreamt of dragons every night. Dreamt of iridescent scales, wicked claws, eyes like liquid fire poured into the depths. I saw the dragons in my dreams, opening their mouths and roaring, breathing flames. I’d wake, expecting the sizzle of burned flesh and skin, but there was nothing except the other children.

The Sorcerer’s dungeon was vast. Its corridors and cells were cut from the rock beneath the Sorcerer’s palace. Up there, you’d find all the riches of the known and unknown worlds, that’s what people said, though I never saw it myself. Furniture covered in gold brocade, floors carpeted with silk and furs, every surface adorned with sculpted marble and ornaments of polished chryselephantine and carved ivory.

Down below, there was nothing but us children, nothing but nightmares and terror and slow death.

One night, I heard a boy screaming in the darkness. Two older children tried to soothe him, but he would not settle. I tried to sleep, but all I heard was the boy, shrieking. I closed my eyes, but all I saw was dragons. For a moment, with hunger digging its claws into my belly, thirst constricting my throat, I got angry with that boy. I wanted to shut him up, no matter what it took. I went over and looked into his screaming face. My hands closed around his arms, gripping hard enough to bruise. He screamed louder, the sound of him filling my head, filling the dungeon, so sharp and loud and bright it seemed to split my skull and vision, and I felt something then I had never felt before.

I released the boy, and he stopped screaming, but the power was still there, all around us. I could see it. It was like flames, flickering through each and every one of us, and to my eyes it looked terrible and beautiful and strong. This was why the Sorcerer kept us prisoner, I realized. Our fear, our despair, our grief, our pain, our lives, kindled a power he could use. He’d made himself powerful by using us.

I looked around. Every child was awake, eyes glinting. They’d all seen what I saw, they’d all felt it too.

We did not speak. We just reached out for each other, touching a hand, a shoulder, a cheek. All through the dungeon, though I could not see it, I knew all the children were doing the same. And then we all opened our mouths and screamed. The heat of that scream burned through the dungeon, through us, through our limbs and lungs and mouths.

I felt our power flare and grow as we screamed, felt myself change in that heat, felt iridescent scales forming on my skin, felt my wicked claws, felt the fire light in the depths of my eyes. Around me, all the others changed too, screaming louder as the wings of our power took shape.

Our voices resonated through the rock, through the bars, shook the walls, shook the palace, shook the world, engulfing earth and sky. We screamed, and the scream turned into song, a song we sang together until the Sorcerer’s palace cracked and fell to pieces all around us, the Sorcerer himself falling into ruin as it crumbled, and then we all spread our wings and fled.

In my garden, the sunlight hits the statues I’ve shaped. Each statue is carved from a piece of the palace that stood upon this cliff. I’ve used my power and my talons to give the rocks a new shape, just as we reshaped ourselves and our world.

The sea glints below, and I see the wings of my people, rising high in the clouds, skimming low over the waves, voices joined in a different kind of song than we sang in the dungeon, wielding a different power now, weaving a different world.

I spread my wings and join them.

Cover art for this story created by me, using Canva. The dragon is from the Dragon Bridge in Ljubljana.

1 thought on “Read my flash story “When the Dragons Came” from R.B. Wood’s WORD COUNT PODCAST”