Our story prompt for this episode of The Word Count Podcast was the photo below.

This story sure took a turn. Usually when I write flash, I have a good idea of what I want to do, how I want to twist the story at the end. This time, the story twisted away from me when I did my last read-through. Instead of the ending I had planned, I ended up with a different one. 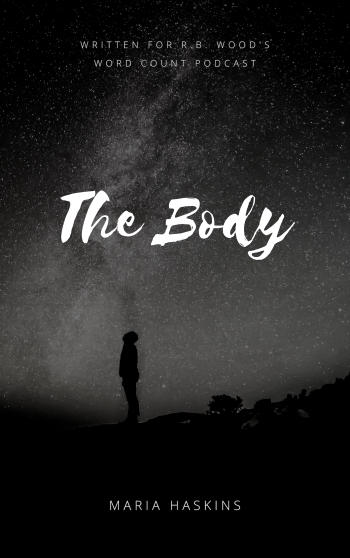 There’s a dead body in the gully beside the snow-covered creek. The body shouldn’t be there, but it is. Sydney can see it from the cliff, high above. She sees more than she wants to see – face turned down, limbs all crooked angles, half-covered by a mound of rocks and dirt from the steep slope. Blood in the snow.

Peeking over the edge, Syd buries her fingers in Tico’s brown fur for warmth. The dog whimpers, teetering so close to the ragged edge of the cliff that her paws almost slip. Sydney grabs hold of her, imagining feet and paws scrambling for purchase, finding none.

There shouldn’t be a dead body here. Shouldn’t be anyone here but her and Tico. She hasn’t seen anyone since she left the more frequented areas around the trailhead. It’s off-season, too early in the year for most hikers.

In all her years of coming here, she’s only rarely seen others out here. The park is big, and this part of it is remote, seldom used.

“Got to get down there, girl.”

Tico wags her bushy tail, eager as always when they’re on a hike.

She knows this place, this trail, this park, like the back of her hand. Been hiking here since she was a kid coming out here with grandpa, sitting with him, high above the world on this cliff, learning the names of the constellations. Later, she brought her own kids, Caroline and Thomas, her husband too before he left her.

Sydney’s breath gathers around her, tattered mist in the cold morning air.

Maybe they’re not dead, she thinks, but no. The angle of that neck. All those rocks. Dead. For sure.

Halfway down, Sydney spots the creek bed and the mound of rocks again from the steep trail.

She squints in the brightening sunlight. A silhouette, dark against rocks and snow. Crouched, right where she saw the body.

Two people. One alive, one dead. Out here, even though she hasn’t noticed a shadow or a whisper of anyone.

Another, darker thought twitches through her. What if it wasn’t an accident?

Tico never strays far, but now the dog’s half running as if she’s got the scent of a squirrel or someone she knows.

Don’t you carry a gun? people have asked her more than once when she tells she hikes alone.

No weapons but my knife and my wits, she’d joke.

No phone either. Even when the kids begged her to get one. Especially this time, heading out alone so soon after the all-clear from the doctors. Caroline and Thomas joined in a rare moment of agreement.

How could she explain it to them, what it meant to be here again, away from the hospitals and the doctors, and, as much as she loves her kids, away from them too. Away from the caring and the pity. To be alone. Just her and Tico.

But this time the dog doesn’t listen, just runs ahead, towards the gully. Towards the body. Toward the silhouette.

Tico’s been such a good dog. She picked her up from the pound two days before she got the diagnosis. Without the kids and the dog, she’s not sure she would have made it through all the years of health bullshit. But she did. For Caroline. For Thomas. For Tico. For herself. To make it out of that hospital. To come back here.

Tico waits for her beside a boulder near the bottom, standing at attention, ears and eyes forward, tail up.

Tico gives her a look and walks on, sniffing the ground.

Sydney follows, rounding the pile of boulders where grandpa always stopped to light a cigarette when they came here.

Ahead is the gully and the creek bed, the drifts of snow. And in the beautiful bleakness of this landscape, a woman sits on the ground beside the mound of rocks and dirt. The woman’s long, dark hair whips around in the wind, revealing her face. Sydney can’t feel the wind, and yet she shivers as if it’s blowing right through her when she hears the voice.

“They’re coming to get you, mom. The police. Coroner. Whoever.”

“Caroline?” Sydney speaks the name, but the wind tears it from her lips, unheard.

The woman doesn’t notice her. It is Caroline, and yet it can’t be. Caroline is 18. This woman is much older.

“A hiker found your bones, mom. I knew it was you as soon as I got the message, even though they said it won’t be conclusive until they can confirm it all blah blah blah. But I knew. The bones of a dog and a woman, out here, ten years after you disappeared on that hike you went on? Had to be you and Tico.”

Sydney looks at the pile of rocks. She thinks about Tico at the edge above, so close to falling. Thinks about feet and paws, scrambling for purchase, finding none. Thinks about falling.

The rumble of rocks and dirt. Pain. Darkness.

Caroline leans down to touch the ground, the rocks, and for a moment Sydney sees the body there, her body. Sees it as she saw it from above, her own limbs broken and crumpled and crushed. Tico hidden under her beneath the dirt.

Then, the vision passes and it’s nothing but snow and rocks and Caroline again.

“Thomas would have come too, but his wife’s giving birth any day and… Anyway. I’m glad I came. For the first time since you disappeared, I feel close to you again.”

Sydney looks down at Tico, sees the sunlight shining through the dog’s body, as if it is no more than breath, a fading memory of warmth in cold air.

“I miss you, but if you were going to disappear anywhere, I know this is where you’d want to be.”

Sydney reaches for Caroline, but her hands are less than mist, less than smoke.

The light is everywhere.

Cover art for this story created by me, using Canva.