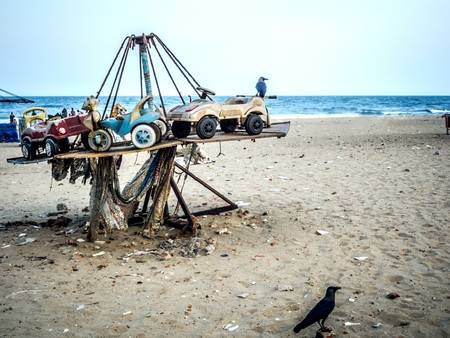 You can listen to the episode, and if you’re at ReaderCon you can check out a bunch of authors from the Word Count Podcast at a live-reading. I won’t be there, but you should definitely go hang out if you can. It’s on the program on Friday July 13 at 5 pm as “Group Reading: The Word Count Live Salon”.

She watches the children playing in the shallows, feels her pulse skip and quicken.

The girl is fearless. She runs into the waves and dives below while the boy walks in cautiously, until finally he is floating on his back, arms out, a clumsy starfish.

He’d drown easier, she thinks, smoothing out the bright red bathing suit fabric, tugging it in place around her thighs, trying not to feel the hunger twisting in her gut, the craving for flesh and gristle, for tender meat to rip and tear.

Standing here on the beach she feels the weight of her body, so much heavier than it would have been beneath the waves. So slow in this pale, translucent skin. Some days, at home, she feels so slow and heavy it’s hard to get out of bed, the weight of what she is and what she can’t be anymore, holding her down until she cannot move at all.

Those days, life itself seems like nothing but rust and iron, hook and sinker, a body on the rocks, stripped of its lustrous hide.

It’s different on the beach, especially now in summer. Easier and harder at the same time. The air smells of salt and seaweed and sunscreen, bodies crowding close in the sand. Gleaming, touching.

She leans on the old merry-go-round, the cracked wood, the sun-bleached plastic of the car-shaped seats. Hears the creaking of the wood, feels the wobble of loose nails and metal bars.

It’s been a long time since anyone used the merry-go-round, and the only ones perching on it now are gulls and crows.

She remembers when children played on this merry-go-round, screaming and laughing as they spun. She remembers watching them from the water, wondering what it would feel like to be one of them.

That was long ago.

Everything is long ago.

The sun is hot on her skin, and she stands very still, feeling the hunger, feeling her weight, the lush folds of her waist and belly, breasts and back.

It’s a good a body, but here, so close to the water, she longs to feel the tug of waves and current, to slip beneath and dive until the light isn’t even a faint glitter above.

The children play in the shallows. Skin wet and glistening, hair plastered to their skulls.

Nearby, a group of older girls walk by, giggling, tugging nervously at their bathing suits, assuring each other they are beautiful. Nothing weighs them down it seems and yet she knows it isn’t so. Everyone is weighed down by something. Everyone carries their own chain and anchor.

All flesh is beautiful, she wants to tell them, and beneath the water being round and sleek would serve you well.

The children scream. She turns, teeth sharpening behind her lips, but they are only splashing each other. Breathing deep, she forces herself to look away. The longing is almost overwhelming now, the desire stirring beneath her skin – to let go, to release herself, to become what she was and should always have been.

She walks closer to the water’s edge, heels sinking deep in soft sand, salt water spilling into her tracks. The strength and power of the ocean lapping at her ankles.

I could leave, she thinks, remembering a day years ago when she tried. When she swam out so far, she could barely see the shore, the cold embracing her, fish and crabs calling from below.

The children scream again, chasing each other through the waves. She watches their small bodies cleave the water. Soft limbs, supple skin.

She walks in slowly, relishing the tickle of cold water around her midriff, the gentle caress of waves as they slip inside the red bathing suit. Then, she dives.

Below the surface, her slow, careful movements are transformed into fluid strength. The joy of it almost overwhelms her – her legs fusing as she kicks, nostrils narrowing, pale skin turned mottled grey and black.

Holding on to what she was is like holding a squirming, slippery sea-creature in your hand, its wriggling shape spilling between your tightly closed fingers. It’s almost more than she can bear, more than she can stand, she wants to be part of the salty water, wants to dive deep into the darkness, swim up the coast to a beach where the sun plays over smooth pebbles and rippling sand. She wants to feed. Wants to feel raw, fresh meat between sharp teeth, the taste of blood when she swallows.

She knows she’s already been under too long, and when she bobs up, she raises her arms slowly to make sure they are still arms, hands, fingers. A shiver of fur and mottled grey slips away along her spine, underneath the bathing suit, her lower body turning back to legs and feet and toes when she closes her eyes and wills it so.

“Wow!” The boy’s face is next to hers in the water, brown eyes shining. “You stayed under so long, mom!”

She smiles at him and rolls over on her back, looking up at the sun.

“Mom, did you see? Did you see me do a handstand?”

The girl shouts and she smiles; keeping her teeth small and blunt, her mouth closed, feels her body lose its fluidity, slowing, steadying.

“Show me again,” she says, knowing that whatever kept her here once, it is no longer her own body that tethers her, but theirs.

It’s all right. She can live with it, with the sadness, the loss, buried in her flesh like a barbed hook, she can feel the joy and happiness anyway. After all this time, she knows how to live, knows she can be like the ocean itself, a sunlit surface, hiding the far depths below, seas and caverns full of life and hunger, unseen and unguessed.

The artwork for this story was made by me, using Canva. 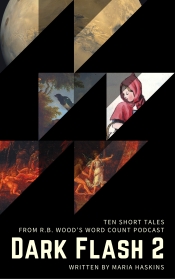