You can hear me read this story on episode #66 of R.B. Wood’s Word Count Podcast.
The prompts for this episode were “May”, and this gorgeous photo by R.B. Wood himself: 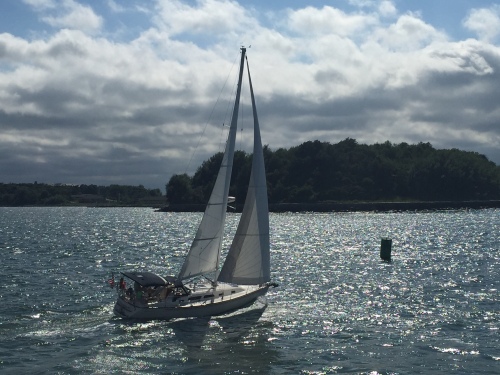 Though this photo was taken in Boston Harbor, I set my story on the Pacific coast, just outside Vancouver.

“Where are we going,” I ask Daniel again, and once again he smiles from behind the tiller and says it’s a surprise.

I smile back, nibbling on my potato chips, trying to relax in the May sunshine as the boat skims the waves.

“Don’t wreck your appetite, Bethany!” he calls out. “Remember, I’m cooking dinner on board tonight.”

Cheeks burning, I put the bag of chips away, even though I’m ravenous.

It’s my own fault. I know Daniel doesn’t like it when I eat between meals. I should have had a bigger breakfast, but I was afraid of getting seasick and throwing up.

I’ve never been in a sailboat on the open sea before. I never even swam anywhere but a pool, and even then, my grandma was terrified for me.

“I don’t want to lose you,” she’d say and hug me tight when I got home, smelling of chlorine.

Strange that being here, with Daniel, should make me think of grandma.

She was so scared of the ocean that she moved away from the coast with grandpa, settling down half a continent away on the prairies where the only water not on tap is creeks and ponds.

“The sea is dangerous,” she always said. And she really believed it. Mom never even learned to swim because grandma wouldn’t let her.

Even though I moved to Vancouver a year ago, it never struck me until now that grandma came from somewhere around here. But since she never spoke of it, I don’t know where.

Daniel is explaining ropes and wind, but his words slip right through me. Instead, I’m listening to the ocean whispering beneath the keel. It’s just a murmur, and I’m not sure what it’s trying to tell me.

Daniel laughed at how nervous I was getting on board this morning. He didn’t laugh about the bathing suit though. I wore my old one: flower-print and ruffles, and I knew as soon as I saw his face it was a mistake.

“It’s just…you look so much better in the black one I bought you,” he said.

I know what that means. It means the black one makes my waist look thinner, my thighs less thick. Just like the dresses he picks out for me. They all nip and tuck. Squeeze and hold.

His food is top-notch, too, even if it always leaves me hungry. There’s just never enough of it. Still, it’s nice that he cooks. Mom says I should be grateful.

Stomach rumbling, I grab a beer from the cooler and watch the coastline. I wonder if I’ve seen this place before, in a movie or a photo, maybe, because everything is strange, yet familiar: the undulating shape of that mountain range, that rock jutting out into the waves, that inlet cutting through the forest.

Grandma would have known, I think, listening to the plaintive voices of the gulls, calling out long-forgotten names.

“The sea is dangerous because it remembers too much,” she told me when I visited her right before she died.

“What does it remember?” I asked, but she never said.

Daniel keeps talking, but I’m leaning on the railing, looking into the sea, and it’s hard to hear his voice. It’s almost as if he speaks another language, one I don’t understand anymore, and do not want to understand.

In the afternoon, Daniel anchors the boat in a cove. The forest crowds close, and on the beach, smooth rocks slip into the waves.

“Look,” Daniel says, pointing at the shore, but I’ve already seen them.

There are three of them, lounging at the water’s edge. Their hair is long, twined with seaweed, webbed fingers waving lazily, necks strung with braids of kelp, shells, pearls.

I close my eyes, look again. They’re still there. I look up at Daniel, heart pounding against my ribs.

I look at the shore, trying to see what he sees, but I can’t. I see thick-limbed, smooth-skinned female bodies lounging, silvery legs outstretched. They smile at me with sharp teeth, lascivious and inviting, as if they already know who I am.

“They come here to gorge on herring and salmon. I’ve watched them eat, and they just swallow everything whole. Hungry beasts.”

“They’re beautiful,” I say, but something spiky and cold crawls in the pit of my stomach.

We eat underneath the stars and Daniel falls asleep while I do the dishes.

I pick at the leftover bits of food on the plates, but there’s nothing left that will satisfy me.

In the dim light, I look at Daniel. There are no sounds other than his breathing, and the strange, yet familiar voice of the sea, murmured words lapping against the hull.

I’m so hungry. I’ve been hungry all day, and now the hunger shivers beneath my skin, ripples through my gut, trembles sharp and jagged in my mouth.

I lean over Daniel, inhaling his scent, exhaling my hunger.

When his eyes open, he whispers, then screams a name, but I don’t stop, I don’t listen, and my new claws and teeth keep tearing through him, because the name he screams isn’t mine, not anymore.

Afterwards, I head out on the deck. I can’t see the shore or the women in the dark, but I know they’re waiting for me.

I climb down the ladder in the stern and slip into the darkness. Three shapes approach, their movements sinuous with predatory grace. I see their smiles already, hungry and beautiful, free of regret and remorse. They are singing a new name to me, their scales shimmering with a green and wavering light as one of them pulls me down beneath the surface. I don’t resist. I sink.

Grandma was right. The sea is dangerous. It’s dangerous because it remembers who you are, even when you’ve forgotten.

Note: For the cover art, I used Canva, and a photo of these petroglyphs on Vancouver Island.