You can hear me read this story on episode #65 of R.B. Wood’s Word Count Podcast.
The prompts for this episode were “April”, and this wonderful photo by Bill Kirton, one of the regulars at the Word Count Podcast:

I’ve contributed stories to the Word Count Podcast since January 2016, and without exaggerating, I can say that it’s been a game-changer for me as a write. I had never written flash fiction before I wrote my first story, The Unicorn, for the podcast.

It was a real challenge to write a story so short it would be no longer than seven minutes when read out loud, but I soon realized that I LOVED that challenge. Writing for this podcast has been a whole lot of fun, and a great way to hone my writing skills. Since last year, I’ve sold two stories to Flash Fiction Online (‘Scent‘ and ‘The Machine of the Devil‘) something that would probably never have happened if the podcast hadn’t given me such a taste for flash.

Huge thanks, as always, to R.B. Wood for putting this podcast together. He’s an inspiration, and if you want to know some of the reasons (beyond the podcast) why he’s an inspiration, read this post on his website: Life Finds A Way. 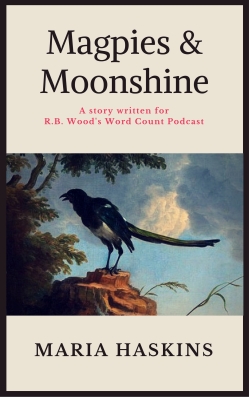 Thomas hates the magpies. He hates their harsh, loud voices, especially after a night of drinking, and the way their eyes glint at him from the trees when he’s cleaning the fish – cutting off the heads, slitting the bellies open, scraping out guts and entrails, hearts still beating beneath his knife.

More and more magpies gather in the brisk April morning air, black and white feathers fluttering, green-shimmering tails twitching, their laughter sharp and jagged. The sound reminds him of the girl’s coughing last winter, the way it irks and rankles, the way it makes him want to strike and scream.

“She needs taking to the doctors,” Helen told him, face hollowed out by too many sleepless nights.

He told her what he thought of that. Coddling that girl as if she were made of porcelain. And what good would medicine do anyhow? Only cost you an arm and a leg and leave you no better off. Besides, taking her anywhere would mean trudging through the snow to borrow the neighbour’s horse and sleigh, freezing his ass and fingers off, most likely all for nothing.

He’d looked at the girl, that small face of hers flushed with fever. He’d looked and listened to that infernal cough until all he’d seen was the man who’d gotten Helen pregnant before he went and died in the war like an idiot.

Thomas puts the fish in the smoker, takes a swig of moonshine. The mossy forest-floor gleams in the sunlight through the pines. Further down-slope the cove shimmers blue and cold, bright new leaves starting in the tangled branches ‘round its shores.

Helen used to say it was beautiful, and the memory of that chafes and prickles, though the moonshine washes most of it away.

In the trees, the magpies still caw and craw. Thomas shouts at them to shut up, but they only laugh louder.

Helen tamed a baby magpie when they were children. She found it underneath a tree, and fed it from her hand. It used to sit on her shoulder, and came when she called. Thomas wanted her for himself even then, when she was only ten and he was fifteen. But she never looked his way, and so he waited, saw her marry another, saw her carry the child, saw her grieve when the other man was dead.

He had better offers, what with this patch of new-broken land, new house and barn and byre. He could’ve had other women, as he never forgot to remind her, but he’d waited for her. And finally she came. Moved herself into the woods for his sake, bringing the fool girl with her.

Thomas thinks of Helen, that night after the funeral when she sat at the table and looked out the window at the icy water below. Her face gone hard and empty.

Next morning she was gone, footsteps lost in falling snow.

Some people in the village say he killed her. Some say she drowned herself. Some say they’ve seen her in the forest, speaking of her as if she were a ghost, roaming beneath the boughs.

More than likely, Helen’s far away by now. Took the train south perhaps. That’s what he thinks most days.

Other days when he looks towards the cove, he thinks he sees her there, waiting for him beneath the trees, patient as she always was, but he knows it’s only memories and moonshine.

Thomas tends the smoker until evening and the magpies never stop cawing.

When the jug is empty, he gets another. Gets his rifle too. It’s not right to shoot magpies, Helen would say. They don’t harm anyone. They only eat what’s dead.

Sky and trees turn into wings and screeching. Then all is silent. The magpies are gone. All that’s left is the dead one on the ground.

Thomas takes the fish out of the smoker and puts it away in the larder. When he comes out, there are hundreds of magpies in the trees. Not one makes a sound. All are looking at him.

They watch him as he drinks, as he goes to the outhouse, as he cleans the fish-trap. Their silence is so heavy he can barely breathe. He tries shouting at them, but his voice is too small in the great stillness. He loads the rifle and shoots one more, two more, three more, four and five until at last the birds take flight.

With the jug beside him, he sits down on the porch and eats the smoked fish. Chewing through the fine bones, tasting the salty alder-smoke. Looking at the cove through the silent, empty trees, he thinks of Helen’s face in the firelight, thinks of her huddled with the girl that night when she coughed her last and died.

He looks up. A woman stands before him in the yard, dressed in a rustling cloak of black and white. In the setting sun, the black shifts and shimmers into green.

“You’re nothing but moonshine!” Thomas shouts, fear and anger in his voice as he takes another swig from the jug and puts another bit of fish in his mouth. When he swallows, he feels it go down the wrong way, feels the little bones stick and block his craw. He hacks and wheezes, gasps for breath, while the woman only looks at him, her face gone hard and empty.

As darkness descends, Thomas remembers the girl wheezing and hacking in her bed, gasping as she struggled for air.

The woman turns, her cloak billowing and fluttering, flying apart into a dark wind of wings and feathers, caws and laughter, voices loud and harsh, a thousand laughing magpies settling in the trees above him.

“Don’t worry, Thomas,” Helen whispers as he claws at the dirt, thrashing and fighting for a breath that will never come, “they only eat what’s dead.” 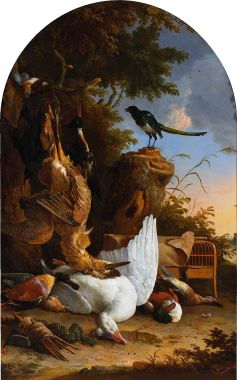 Note: the cover art for the story is a detail from the painting A hunter’s bag near a tree stump with a magpie, known as “The contemplative magpie”. It’s by Melchior d’Hondecoeter, and was probably painted around 1678. The painting is in Rijksmuseum Amsterdam, Amsterdam.