You can hear me read this story on Episode #58 of R.B. Wood’s Word Count Podcast. Instead of a three-word story prompt, this time we had to deal with an opening sentence-fragment: “I was enjoying the summer holiday when…”

I wrote this story while on vacation in Sweden, and I think it was partly inspired by spending time with my sister, as well as talking and thinking about past and potentially future trips to Greece.

In this episode of the Word Count Podcast you can also hear stories by Eden Baylee, C. Thomas Smith, Rob Edwards, and Bill Kirton. 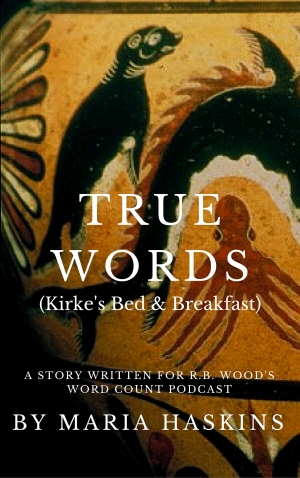 “I was enjoying the summer holiday when you came along and spoiled it.”

Chloe is drunk on mother’s retsyna wine and cherry schnapps, tears and pain catching in her throat. She’s not speaking to anyone in particular, just repeating what mother has shouted at her countless times through the years.

The only one listening on the island’s night-dark beach is mother’s ancient dog, its eyes glistening from the steep path leading down from the olive groves above.

Far away, in the village, a tinny stereo is playing The Beatles, a song about a word that will set you free.

“Go!” Chloe shouts at the dog, trying to sound like mother does when she’s drinking, tossing empty cans or bottles until Chloe leaves.

The dog does not leave. Chloe thinks of the red gleam in mother’s eyes when she gets drunk enough: “You’re no child of mine. I found you on the beach and took you in, more fool me. Look at you, fat and clumsy with those big black eyes.”

Unspoken: nothing like your sister Celandine, sleek and sure, true and beautiful. Long gone.

Growing up, Chloe was never sure whether mother spoke the truth about her parentage, or if she only looked for words to cut as deep as possible, because mother knows, as sure as Chloe does, that words can change you, can change your life, can change the world.

Chloe hasn’t been to this particular beach in nigh on thirty years. Or maybe it’s three thousand years. Chloe has lost count along the way. What she knows for certain is that last time she came here, she lost her sister.

They were young then, but they already knew that something fearsome lurked within them both. Now and again they’d search for it together, poking wrists and palms with the sharp tip of a knife to see what might be hidden underneath their skin.

“I can’t stay,” Celandine told her that night, and Chloe felt the darkness tugging her sister away. “If I do, Mother will keep me penned up forever. Maybe kill me, when the love runs out. Like the others.”

“What others?” Chloe asked, such a dupe, such a fool back then.

And oh, she’s counted since: dolphin skins pinned to the walls, cow hides spread upon the floor, wolf pelts piled before the fire, and pigs’ hides bundled and sold to the tanners in the village.

“Go where? And how? No one can leave mother.”

Unspoken: unless she lets them go.

The tourists come. They stay for the home-baked breads and farm fresh eggs, and sleep in the island cottage by the sea. They laugh at all the pigs, at the dogs and cats, at the tame seabirds caged on the porch. Mother lets them come and pay and leave. It wasn’t always that way, not when mother was younger and even more beautiful than now. No one left Kirke’s Bed & Breakfast, then.

The dog barks at Chloe: a warning, telling her to hurry. She gives the dog a long look, but doesn’t speak: they’ve already said their goodbyes. The dog’s melancholy, faintly glowing eyes reflect a fire that has long since gone out.

That night, long ago, Celandine stood up in the sand and pulled her dress over her head. Just like Chloe is doing now.

Celandine spoke one word. They were young and drunk, but even so, Chloe knew it for a True Word. She’d heard enough of them from mother to recognize the resonance and weight.

Then she turned to look at Chloe one last time. All these years later that is how Chloe remembers her sister: darkness all around, moonlight shining through her.

Chloe never told mother what happened. Only said that Celandine was gone, and that mother would never find her. She never did. “Maybe you drowned her,” mother said when she wanted her words to bite their deepest. “Maybe you held her under. Or maybe you just watched her slip beneath and drown.”

She’d say anything, rather than consider the truth: that Celandine wanted to leave.

Chloe stands rigid, ankle-deep in the Ionian Sea. The beach is the same as when she lost Celandine, but she herself is changed. Heavier with flesh, memories, and scars. Celandine left too much behind, too much darkness and loneliness for Chloe to carry on her own, whether it’s been thirty or three thousand years.

Celandine spoke the word. Then she shook herself, a rustle of skin and bones, and shed it all. Her body fell away, and a lithe, winged creature, aglow with moonlight, took flight over the water, skimming the waves.

“I found your sister on the beach, too,” Mother told Chloe once when she was drunk enough to cry. “Healed her. Kept her. Loved her. And you let her go.”

Tonight, Chloe has a True Word of her own. She dreamt it. Or maybe someone whispered it to her in the night.

She looks at old Odysseus, mother’s dog and servant, lingering on the trail. He’s watched over her, waking and sleeping, for as long as she can remember, and there are times when he looks so wise that Chloe might believe he has a voice and story too.

The sand is cooling. The moonlight on the water is smooth as sky. Chloe speaks the word.

A rustle of skin and bones, a shiver of fur and flippers.

Odysseus runs along the beach, capering but quiet, letting mother sleep as the monk seal dips its head below the surface, and is gone. 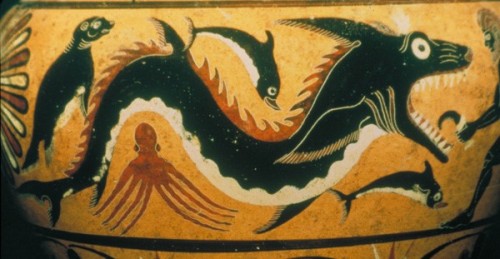 The image used for the cover/illustration is from an ancient vase, dating back to 520 – 510 B.C. It shows a mythical hero fighting a sea monster in the presence of a Mediterranean monk seal. Read more about ancient Greece and monk seals here.