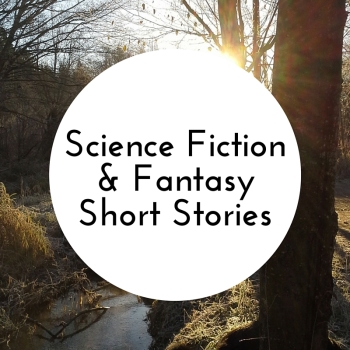 I’ve read a lot of great short stories this past month. Here are 11 of my favourites.

You’ll Surely Drown Here If You Stay, by Alyssa Wong in Uncanny Magazine. “But here, as the mountains cup the sky with deep brown hands, the call to bound away, howling, with the coyotes in the brush becomes almost unbearable.” (I love that line so much that I just had to quote it.) Wong’s weird western/desert story is beautifully written, haunted by undead creatures, strange beings (both human and not), and revenge. It also packs a a lot of emotional power: love and friendship and family are tightly entwined with some very trippy desert-magic. There’s an underlying sense of deep sadness and profound loss woven into the story from the very beginning, and it kept me captivated from the first sentence to the last.

A Dead Djinn in Cairo, by P. Djeli Clark at tor.com. This is the kind of story that makes me want to jump through the pages and into the world it describes. It’s a supernaturally charged steampunk-ish murder-mystery, set in an alt-history Cairo, and the characters and the world are so vividly and brilliantly captured that by the time I finished the story, I wanted a) a tailored suit (read it and you will know why), and b) more more more of this world. Awesome stuff.

A Certain Kind of Spark, by Gwendolyn Kiste in Mantid Magazine. Kiste’s story of two sisters, one blessed with “a spark” that makes the world take notice of her, and the other without, is mesmerizing. There is magic here, certainly, but the relationship between the sisters feels excruciatingly genuine and true. It’s a story that perfectly captures the often complicated and complex relationship between siblings, and it has haunted me ever since I read it.

Things With Beards, by Sam J. Miller in Clarkesworld. A horror story, a monster tale, and also a story about the scariest things of all: what human beings do to other human beings. Miller’s short story captures so many levels of horror and fear: the fear of what others can do to us, and the fear of what we ourselves are capable of doing to them. One of the best short stories I’ve read this year.

Suicide Bots, by Bentley A Reese in Shimmer. Oh, how I love this story. Robots losing their minds, a heist, fast cars, body parts flying every which way… and action-packed writing so taut and wired that I felt on edge, unsure of what crazy turn the story would take in the next paragraph (or the next sentence). An unsettling and thoroughly engrossing read.

Life in Stone, Glass, and Plastic, by José Pablo Iriarte in Strange Horizons. One day when Sergio has to clean up some graffiti, he encounters a mysterious collage/mural that draws him in to another life, another place, another time… There’s magic in this gorgeously crafted story, a magic that feels so close and real I could well imagine it occurring around the corner where I live. Weaving together the everyday with the fantastical, it’s a brilliantly told tale that really lingered in my mind after I read it. (I also LOVE the ending.)

Cuckoo Girls, by Douglas F. Warrick in Apex Magazine. Two girls, bound together by the same horrific fate: they are being chased by monsters that have killed their families, and are now seemingly hellbent on killing them. A basic horror-story premise? It could be, but Warrick cleverly plays around with a lot of horror-story and horror-movie tropes, turning the expected into something very original and unexpected. As the story goes on, we go deeper and deeper into the horror and fear that drives both the girls, and the monsters. Also: ‘Cuckoo Girls’ freaked. me. out. An excellent read.

Salto Mortal, by Nick T. Chan in Lightspeed.  Domestic abuse, aliens, drones, lucha libre… all these things play an important role in the captivating ‘Salto Mortal’, set in the near-future on the border between Mexico and the United States. It’s an eerily familiar world where there is a wall between the two countries, and where the fear of naguals, or aliens (the extra-terrestrial kind), looms large. I love how real and close this story feels: it’s the kind of science fiction that is rooted in the fear of what human beings can do to each other, rather than whatever imagined cruelty an alien species might bring down on us.

The Red Thread, by Sofia Samatar in Lightspeed.  Samatar’ story is set in a future-world that is familiar, yet strange enough to be both haunting and unsettling. Many people, including Sahra and her mother, are continuously on the move, away from the so-called isolation zones and the ever-looming threat of violence and destruction: “What’s isolation but a kind of shunning? — “That’s what we do, in the Movement. We move on, away from violence. A place ruined by violence is a prison.” It’s written as a series of letters from the young Sahra to her friend/lover Fox, and it’s a rich, complex tale of love, desire, longing and belonging, loneliness and friendship.

Ruminations, by Rena Mason in Nightmare. I love stories that jump between timelines and realities, and Mason’s story is a fantastic example of how deep and layered you can make that kind of tale. ‘Ruminations’ blends the story of the old woman Luisa, living in something like our present day, and the young woman Ottaya, who is on a mission in a conflict-ridden future-world. The two stories and worlds intersect and affect each other in strange and haunting ways, but I won’t give away too much: it’s a pleasure to just let this story take your ever further into its mind-bending rabbit-hole of strangeness. Make sure you read Sandra Odell’s author spotlight interview with Rena Mason after you’ve read the story.

Mountain Ways, by Ursula K. Le Guin in Clarkesworld. Gorgeous prose is a given in a story by Le Guin, but this tale also shows how well she can tell a tale where “nothing” happens. Well, nothing but the drama that occurs because of the ever-changing relationships between people. In ‘Mountain Ways’, she sets her tale in a society where marriage involves four people – two men and two women – all expected to behave in very particular, strictly regulated ways within that union. It’s a quiet but gripping tale of love and family, with characters who fight hard to make their own wishes and desires fit into the restraints placed on them by society.