Recently, I’ve been working on several short stories. Two will surface in a new Mind’s Eye anthology, two (so far!) saw the light of day in R.B. Wood’s Word Count Podcast (you can check them out here), others have been submitted to various places but don’t have homes just yet. It’s been a rather intense few months of writing for me, and it has reinforced in my mind how much of writing is actually rewriting: going over the text over and over again, combing it, pruning it, hacking and slashing at it, gutting it, sewing it back together, and so on and so forth.

I tend to write rather wildly and messily in my first draft, and the quicker the ideas are coming, the messier I write, adding in bits and pieces of action and dialogue as I go, not always in a perfectly sequential order. Often, ideas pop into my head when I’m walking the dog, or driving my kids somewhere, and I have to jot things down or record them quickly for future use. Then these snippets are popped into the text once I get a chance to sit down at my keyboard.

After that, I rewrite. And rewrite. And edit and rewrite. Wash, rinse, repeat until I can read the text and feel that it holds together from beginning to end. I always read a story out loud once they start to come together. Working on short stories for The Word Count Podcast where I read and record them to submit them has shown me, again, how important this step is. A lot of problems with the text show up way more clearly when you say the words out loud rather than just read them quietly. 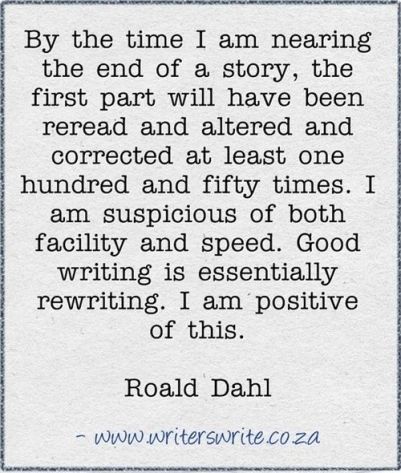 One of the short stories I did submit somewhere was rejected. Once I swallowed my disappointment and went over the story again (after reading both the kind and critical notes in the rejection email), I realized that the story did need to undergo some serious rewriting surgery. I ended up taking the whole thing apart and stitching it together in a rather different way than before. The end result will be a much better (and sleeker!) story, but that rewrite was a whole lot of painful “kill your darlings”.

I love reading what other writers have to say on the subject of editing and rewriting. Here are some of my favourite quotes on the subject:

“By the time I am nearing the end of a story, the first part will have been reread and altered and corrected at least one hundred and fifty times. I am suspicious of both facility and speed. Good writing is essentially rewriting. I am positive of this.” — Roald Dahl

Interviewer: How much rewriting do you do?
Hemingway: It depends. I rewrote the ending of Farewell to Arms, the last page of it, 39 times before I was satisfied.
Interviewer: Was there some technical problem there? What was it that had stumped you?
Hemingway: Getting the words right.
— Ernest Hemingway, The Paris Review Interview, 1956

“I don’t write easily or rapidly. My first draft usually has only a few elements worth keeping. I have to find what those are and build from them and throw out what doesn’t work, or what simply is not alive.” — Susan Sontag

“Throw up into your typewriter every morning. Clean up every noon.” — Raymond Chandler

And I love Samuel Johnson’s variation on “kill your darlings”:

“Read over your compositions and, when you meet a passage which you think is particularly fine, strike it out.” — Samuel Johnson

5 thoughts on ““The best writing is rewriting””