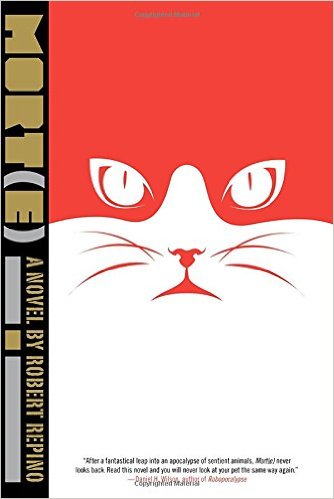 The “war with no name” has begun, with human extinction as its goal. The instigator of this war is the Colony, a race of intelligent ants who, for thousands of years, have been silently building an army that would forever eradicate the destructive, oppressive humans. Under the Colony’s watchful eye, this utopia will be free of the humans’ penchant for violence, exploitation and religious superstition. As a final step in the war effort, the Colony uses its strange technology to transform the surface animals into high-functioning two-legged beings who rise up to kill their masters.

Former housecat turned war hero, Mort(e) is famous for taking on the most dangerous missions and fighting the dreaded human bio-weapon EMSAH. But the true motivation behind his recklessness is his ongoing search for a pre-transformation friend—a dog named Sheba. When he receives a mysterious message from the dwindling human resistance claiming Sheba is alive, he begins a journey that will take him from the remaining human strongholds to the heart of the Colony, where he will discover the source of EMSAH and the ultimate fate of all of earth’s creatures.

‘Mort(e)’ is an odd and surreal read that crept right in under my skin: days later, I’m still mulling it over. I mean, what can you really say about a book that made you go: “WTF? ANTS?”, and also made you cry at least twice, one of those times in public? (That public cry was during the dog Wawa’s backstory, and I can barely think of that part of the book without my chest tightening again.) If you love animals, especially dogs and cats, and if you sometimes think that maybe we humans don’t really deserve the love and loyalty animals often show us, then this book might break your heart a little bit. (It will also reaffirm your belief that we are rather unworthy recipients of that love and loyalty…)

George Orwell’s ‘Animal Farm’ is one of my all-time favourite books, and while Repino’s book has a lot more science fiction twined into its storytelling-DNA it touches on many of the same themes. Like ‘Animal Farm’, ‘Mort(e)’ explores the curse and blessing of ideology and religion: forces that can inspire great bravery and solidarity and goodness, as well as mind-numbing depravity and evil, often blurring the line between the two. Like ‘Animal Farm’, it also explores how brutality and oppression lurk beneath the surface of all Utopian dreams.

At its most basic, this is a tale of friendship and love. Mort(e) the (former) cat doesn’t believe in grand plans and prophecies. He fights and makes sacrifices in the struggle against the humans, but he is not loyal to, or motivated by religion or politics or ideology. He does believe in friendship and loyalty and love, because he has experienced those things: not with humans, but with Sheba the dog, before the world changed. Through every hardship and every battle, the memory of that sustains him.

The book is full of great characters, and even the less than savoury ones get fleshed out enough that you feel for them, too: the formidable ant queen, the former fighting dog Wawa (I even felt a fleeting glimmer of pity for Wawa’s awful terrible owner), the wild cat Culdesac, Bonaparte the pig… I felt for all of them. Mort(e) himself is a fantastic anti-hero: stubborn, distrustful of any and all authorities, brave and ornery, never swayed by grand visions and grander words.

There is a lot of darkness and sadness in this book: the story is permeated by the sense that the world will never be as we want it to be, that we will only ever find brief glimpses of true happiness, and that believing in heaven and eternal bliss in the great beyond can lead to terrible delusions and cruelty. But there are glimpses of hope, just a glint, like a chink in the darkness, and that is what makes this story even more heartbreaking. 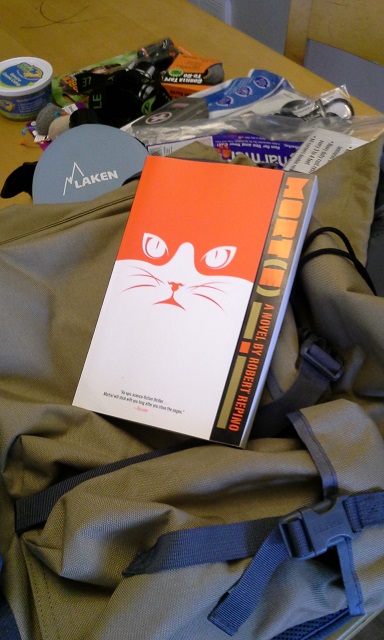 Note: I won my copy of this book in a Tor.com prize pack sweepstakes, and the book itself was part of a rather amazing haul of goodies (appropriately named: “A Cat’s Bugout Bag for the Ant Apocalypse”), including cat toys, a backpack, salmon jerky, catnip, a rain poncho, and assorted survival gear. After my family raided the prize pack, I was left with the book. Fair deal!