My copy of ‘Foucault’s Pendulum’ is the Swedish translation from 1989 in hardcover, and I’m not sure how many times I’ve read it. Ten? Twelve? Something like that. As you can see from the worn slipcover, it’s been put through the wringer. It’s traveled with me through Europe, and from Europe to Canada, and once here, it’s lived in bookcases in a few different apartments before ending up on the Billy bookcase in our current house.

The book blurb tells you the bare bones of the story:

Bored with their work, three Milanese editors cook up “the Plan,” a hoax that connects the medieval Knights Templar with other occult groups from ancient to modern times. This produces a map indicating the geographical point from which all the powers of the earth can be controlled—a point located in Paris, France, at Foucault’s Pendulum. But in a fateful turn the joke becomes all too real, and when occult groups, including Satanists, get wind of the Plan, they go so far as to kill one of the editors in their quest to gain control of the earth.

I love this book. I love Eco’s The Name of the Rose, as well, but this is his masterpiece as far as I’m concerned.

I love its labyrinthine story-line, I love how it travels through history, and through the world, how it brings together religion, philosophy, history, literature, mythology, and turns it all into a story about creation and destruction, science and faith, belief and doubt, love and death, that is both funny and terrifying. I love the glimpses of life in Italy and Brazil. I love its worldly and esoteric insights (from pinball to the Torah). I love it in all its convoluted, brilliant glory.

Like so many of the books I love fervently (The Lord of the Rings, The Waste Land, Tinker Tailor Soldier Spy, to mention a few), this one is complex and somewhat strange and not necessarily easy to digest the first time you read it. The upside of that is that there are always new things to find in it when you read it again. (And again. And again.) 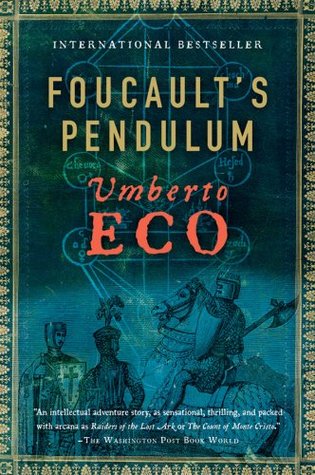 Around the same time that I read ‘Foucault’s Pendulum’ for the first time, I also read ‘Holy Blood, Holy Grail’, which is exactly the kind of historical/religious/self-important misch-masch that Eco makes fun of and skewers so skillfully and thoroughly in Pendulum. Dan Brown’s books are just variations on the same theme, and in an interview, Eco jokingly called Brown a character from his book… which is hilariously on point.

A secret is powerful when it is empty. People often mention the “Masonic secret.” What on earth is the Masonic secret? No one can tell. As long as it remains empty it can be filled up with every possible notion, and it has power.

In today’s world, where ever more convoluted conspiracy theories about the moon landing, 9/11, and the Illuminati (whatever the heck THEY are) are a dime a dozen, this is a very good book to read. It delves deep into the human need to invent “plans”: some kind of narrative that explains the world, filling it with powerful people with secret knowledge who somehow guide and master all events from their secret lairs.

“If two things don’t fit, but you believe both of them, thinking that somewhere, hidden, there must be a third thing that connects them, that’s credulity.”

Eco will have none of it. There is no grand design, for him, there is only life and the universe and its randomness and natural wonders: birth and death and life in between.

“I have come to believe that the whole world is an enigma, a harmless enigma that is made terrible by our own mad attempt to interpret it as though it had an underlying truth.”

Ripped slipcover and all, this book has entertained and educated me through many days and many nights, from Portugal, to Sweden, on trains and planes, on beaches and in bars, all the way to British Columbia. It’s the kind of book I can pick up to comfort me if I’m feeling down: not because it makes me laugh or anything, but because I love its now familiar twists and turns and winding story pathways. I love the language, the characters, the dark and light, the despair and glimpses of hope. It’s not an easy read, exactly, but it is a mesmerizing one, endlessly quotable, and endlessly readable.

“…even the Pendulum is a false prophet. You look at it, you think it’s the only fixed point in the cosmos. but if you detach it from the ceiling of the Conservatoire and hang it in a brothel, it works just the same. And there are other pendulums: there’s one in New York, in the UN building, there’s one in the science museum in San Francisco, and God knows how many others. Wherever you put it, Foucault’s Pendulum swings from a motionless point while the earth rotates beneath it. Every point of the universe is a fixed point: all you have to do is hang the Pendulum from it.”

1 thought on “This old book – FOUCAULT’S PENDULUM, by Umberto Eco”