The cover for ‘Cuts & Collected Poems 1989 – 2015’, my new collection of poetry, came together one day when I was sorting through the wealth of photos on my computer. I’d been pondering various ideas for the cover, but hadn’t really felt that any of them was the right fit. And then I found this photo, taken in December, 2009. 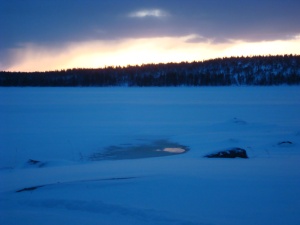 It was taken in Burvik, Sweden, at my parents’ summer place. It’s the view from right in front of the house, looking out over the water – all frozen, since the photo was taken in winter. The photo came out exactly like this (no filters or any other special effects were used): with the blue sheen and light from the sky coming off the snow and ice. It was taken in that eerie twilight that makes up most of the daytime during the winter months in northern Sweden: the sun barely creeps up over the horizon, and soon disappears again.

There was something about this image: the frozen ground, the snow-covered ice, the sky on fire above the darkness of the distant forest, the almost otherworldly blue colour of everything, the bleak yet beautiful landscape… Maybe that – bleak but beautiful – is the key. Whatever it was, I just knew it was the right choice for the cover, and the rest of the job was done by Caligraphics (they did a great job on the cover for ODIN’S EYE, as well).

I love the place where this photo was taken, and have written about it before here on my blog. My kids love it too: we go back and visit Sweden almost every summer, and it’s the kind of place you long for when you’re not there. In summer, it looks quite different of course.

Then, the sun actually does shine, and barely has time to dip below the horizon. The picture below was taken at midnight, in July a couple of years ago. 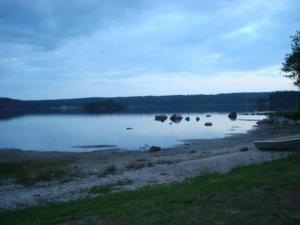 I’m so pleased with how this cover came out, and very happy that it features one of my favourite places on Earth.

‘Cuts’ is Maria Haskins’ first collection of poetry written in English. Also included in this book are her three previously published Swedish collections of poetry: ‘Blå’ (‘Blue’), ‘Honung’ (‘Honey’), and ‘Den tredje’ (‘The Third’). All three have been translated from the original Swedish to English by the author, and are available in English for the very first time.