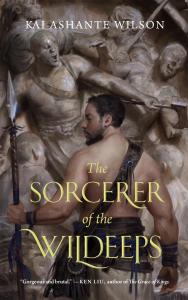 I’m not quite sure what to say about Kai Ashante Wilson’s glorious, enigmatic, and utterly spell-binding ‘The Sorcerer of the Wildeeps’ that will do it justice. Maybe I should just say this: read it. Read it for a story-line that never goes where you think it might. Read it for characters that you desperately want to stay with, even when the story is over. Read it for Wilson’s intoxicating and dizzying prose that brilliantly flexes between crude and exquisite, between earthy everyday and divinely terrifying. Read it for the sheer pleasure of finding a writer who masterfully bends and twists and sculpts the language to conjure up and create another world – familiar enough in some ways to feel like it has to be our own world, yet so strange beneath that almost-familiar veneer that you’re gripped by a sense of WTF-vertigo.

I could read Wilson’s prose just for the pleasure of the language itself, but there is a compelling story here, too, though it’s hard to describe without giving too much away. A bare bones version would be something like this: Demane has left his distant homeland behind and now lives in a strange country, among people who don’t quite know what to make of him, though they’ve seen enough of what he can do to call him ‘sorcerer’. As the story begins, he has been hired to help protect a merchant caravan, set to cross the strange and dangerous place called the Wildeeps – “where many worlds overlap”. One of the other men guarding the caravan is ‘the captain’, a fighter of extraordinary skill who shares a deep connection, in more ways than one, with Demane. As the caravan approaches and enters the Wildeeps, a terrifying creature begins to stalk the men, and Demane’s true powers become crucially important.

But that is only so much surface. What goes on beneath all that, inside all of it, is so much more, as Wilson’s fragmented tale keeps shifting and rearranging the puzzle pieces, revealing the many layers and the true depth of the world, and as the reader slowly realizes the true strangeness of the Wildeeps. I will say this: whatever you expect from ‘The Sorcerer of the Wildeeps’, I have a feeling the story will surprise you.

Kai Ashante Wilson’s prose is completely addictive: shifting effortlessly between crude and base, ornate and almost ceremonial in tone. I recently read his novelette ‘The Devil In America’ at Tor.com, a story that devastated me with its powerful language, original imagination, and bleeding-raw emotion. After reading ‘The Sorcerer of the Wildeeps’, I want to read everything he’s ever written.

Earlier this year I read Gene Wolfe’s ‘Soldier of the Mist‘, and in some ways ‘The Sorcerer of the Wildeeps’ reminds me of that novel. Just like Wolfe, Wilson manages to tell a fragmented and often utterly mystifying tale while keeping my rapt attention from the first paragraph to the last.

Get it from Amazon:

4 thoughts on “‘Where many worlds overlap’ – my review of ‘The Sorcerer of the Wildeeps’, by KAI ASHANTE WILSON”