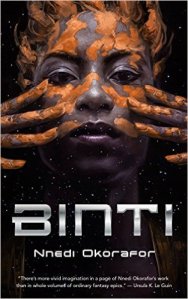 Nnedi Okorafor’s science fiction novella Binti is a suspenseful and exhilarating read that plunges you headlong into a future world where space ships are living creatures, and humanity is just one of many space-faring civilizations. It also plunges you into the mind and life of Binti, a Himba girl, raised in the African desert, who has a singular talent for advanced mathematics. Among her own people, Binti’s talents make her a masterful harmonizer and maker of astrolabes (computer-like devices that are a specialty among the Himba). But her talents have also won her a place at the famous Oomza University, located somewhere far away from Earth.

Binti desperately wants to go to Oomza Uni. However, few Himba ever leave home, and when she steps on-board the spaceship that will take her to university (without telling anyone in her family what she is about to do) it is a momentous decision.

I was the only Himba on the ship, out of nearly five hundred passengers. My tribe is obsessed with innovation and technology, but it is small, private, and, as I said, we don’t like to leave Earth. We prefer to explore the universe by traveling inward, as opposed to outward. No Himba has ever gone to Oomza Uni. So me being the only one on the ship was not that surprising. However, just because something isn’t surprising doesn’t mean it’s easy to deal with.

Even though Binti is rejecting the life-path her family and tribe have laid out for her, she is not rejecting the culture and traditions she grew up with: she keeps the intricate plaits in her hair, she keeps her traditional clothes, and she still covers her hair and skin in otjize (a traditional, cleansing paste made of fragrant oil and clay). She does this, acutely aware that others will likely scorn and ridicule her for it, and it ends up having important consequences when the spaceship is attacked by a warlike, alien species called the Meduse.

After that violent encounter, Binti has to use all her resources and skills to survive. Her struggle – and the transformation it eventually leads to – makes for a thought-provoking and engrossing read. Okorafor skillfully immerses the reader in her future-verse, never explaining more than necessary, but giving you just enough to create a captivating and tantalizing world. She also expertly twists and skews the usual “alien vs. human” scenario, making for an unpredictable, complex and satisfying storyline.

Like all great science fiction, Binti also explores some profound questions along the way. How do we treat those who are different from ourselves – whether those “aliens” are extra-terrestrial or otherwise? And how do you balance the importance of keeping your own culture and traditions, while not allowing those traditions to hold you back?

Binti is a fantastic read, and while it’s the first book by Okorafor I’ve ever read, it definitely won’t be the last.

4 thoughts on “Aliens, mathematical harmony & otjize – my review of BINTI, by Nnedi Okorafor”