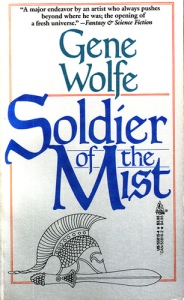 “If you love this, you are wonderfully crazy.”

I guess that means I’m most definitely crazy.

Since I finished reading this book the other night (I stayed awake way, way too late in order to finish), I can’t stop thinking about it. It’s just that kind of book: the kind of book that sticks in your mind, pokes its way into your dreams and thoughts, and worms its way in under your skin, until you find yourself (as you’re going about your everyday, regular business) asking yourself things like: “how did Eurykles turn into a woman, and how come no one remembered that she had been a man – was it the snake in the wine?”, “was that really THAT Odysseus?”, and “was Latro a werewolf, too?”.

How to describe this book? Even picking a genre is hard. It is set quite firmly in a real time and place: ancient Greece, just after the Persian king Xerxes fought the Greeks at Plataea in 479 BC. So, on one level it is historical fiction. But it is also quite clearly a fantasy novel.  Throughout the story gods and goddesses appear to the main character, Latro, and he can speak to them, and even make others see them at times. Latro was a soldier, but he was injured in battle and seems to have been cursed by the Earth Mother (Demeter, though she is never called by that name in the book), and can’t quite remember who he is. Every day he forgets what happened the previous day, and only knows what has happened to him because he writes things down on the scrolls he carries with him.

The bare bones of the plot is that Latro and his travel companions – some of them are his friends, others are not – are on a quest to lift the curse of the Mother Goddess, and hopefully restore Latro’s memory and find out who he is, and where he came from. On the way Latro is captured, enslaved, sold, attacked several times, sees a woman raised from the dead, visits the realm of the dead, and meets various gods and goddesses who help and hinder him, and sometimes want to sleep with him.

It’s an absolutely bewitching story: enigmatic and captivating, complex and teeming with ideas, dreams, characters, mythology, and history. Wolfe’s writing is masterful throughout, vivid and evocative, taking you inside Latro’s world – a world half-seen, half-dreamed, half-real, half-forgotten, constantly re-discovered. And instead of piling on the well-known historical details and facts and place names from ancient Greek history, Wolfe tells the story from Latro’s viewpoint and in Latro’s words as he is writing the story-within-a-story on his scrolls. And because Latro’s mother tongue is not Greek, he transcribes place names as he hears them. Thus, Thebes is never called Thebes, but Hill; Athens is Thought; Sparta is Rope Makers, the port of Piraeus is Tieup, and so on. In the same way, Latro rarely names the gods and goddesses by the names we’re used to from Greek mythology, instead describing them as they appear to him: the serpent woman, the Shining God, the Swift God, the river man. All this is unsettling at first, but ultimately makes the story’s grip on you that much stronger, because you feel like you’re seeing this world for the first time, through new eyes. It’s like experiencing ancient Greece – like it was, like it might have been, like it could have been, for a stranger like Latro who is lost in the mist of his own damaged mind.

Soldier of the Mist won the 1987 Locus Award for Best Fantasy Novel. It’s an amazing book, and I highly recommend it to anyone. It is not necessarily an easy read, but it is a true masterpiece.

There are two more books about Latro: I will be reading those as well, and will also be working my way through other books by Gene Wolfe.

3 thoughts on ““If you love this, you are wonderfully crazy” – my review of Gene Wolfe’s ‘Soldier of the Mist’”