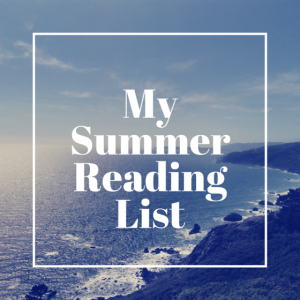 My summer reading lists are always works in progress. There are the hardcovers and paperbacks on my nightstand, all the books on my Kindle, and all those books I haven’t even heard of yet that might end up either on the nightstand or in my Kindle at some future date. But since I love lists, I always have a to-read list, and when it’s summer that list turns into my summer reading list.

Here are the books that are currently on that list:

As you can probably guess, it’s unlikely that I will get through all of these books before the summer is over. But I will make a brave attempt!

Right now I’m reading Soldier of the Mist, by Gene Wolfe. It’s an amazing book that is both strange and wonderful, about a soldier in ancient Greece who has received a head wound in battle and can no longer remember clearly who he is. Every day he also forgets what happened the previous day, and only knows about it because he writes some things down on a scroll. Oh, and he can also see gods and goddesses, and make others see them simply by touching them.

I guess it could be classified as a fantasy book, but it’s very much its own thing. I picked it up after George R.R. Martin recommended it on his blog: I’ve discovered that he has great taste in books (in addition to writing fantastic books of his own). I previously read the ‘Accursed Kings’ series by French writer Maurice Druon because Martin recommended those books, and it was a terrific read as well.