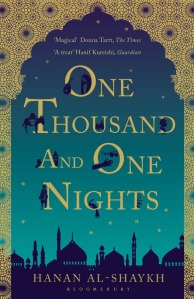 One Thousand And One Nights (AKA Arabian Nights) is often seen as “just” a collection of fairy tales, but then, what are fairy tales but some of the oldest and most enduring short stories told by human beings? The most famous stories in this collection of tales are probably the one about Aladdin and his magical lamp, the one about Ali Baba and the forty thieves, and the tale of Sindbad the sailor. Those three stories have been turned into various movies, both animated and live-action. But One Thousand And One Nights is full of other grand, glorious, titillating, amazing, and wondrous tales featuring dangerous beasts, palaces, genies, mysterious spirits and travelers, treachery and love, poverty and unimaginable wealth.

The framework that ties all these stories together is of course Scheherazade, a legendary Arabian queen who literally stayed alive because of her gift for storytelling. Quoting Wikipedia’s entry on Scheherazade:

The story goes that every day Shahryar (Persian: شهریار – Šahryār‎, “city-server” or the king) would marry a new virgin, and after doing so would dispatch the previous day’s wife to be beheaded. This was done in anger, having found out that his first wife was unfaithful to him. He had killed 1,000 such women by the time he was introduced to Scheherazade, the vizier’s daughter. —

Against her father’s wishes, Scheherazade volunteered to spend one night with the king. Once in the king’s chambers, Scheherazade asked if she might bid one last farewell to her beloved sister, Dunyazade (Persian: دنیازاد – Donyāzād‎), who had secretly been prepared to ask Scheherazade to tell a story during the long night. The king lay awake and listened with awe as Scheherazade told her first story. The night passed by, and Scheherazade stopped in the middle of the story. The king asked her to finish, but Scheherazade said there was no time, as dawn was breaking. So, the king spared her life for one day to finish the story the next night. The next night, Scheherazade finished the story and then began a second, even more exciting tale which she again stopped halfway through at dawn. Again, the king spared her life for one more day to finish the second story.

And so the King kept Scheherazade alive day by day, as he eagerly anticipated the finishing of the previous night’s story. At the end of 1,001 nights, and 1,000 stories, Scheherazade told the king that she had no more tales to tell him. During these 1,001 nights, the king had fallen in love with Scheherazade, and spared her life, and made her his queen.

One Thousand And One Nights is a wonderful short-story reading experience. The stories are not all Arabic in origin, even though the collection is sometimes called Arabian Nights. Rather, these stories were gathered by translators, scholars, and writers in Asia and Africa over many centuries, and the tales come from ancient and medieval Arabic, Persian, Indian, Egyptian and Mesopotamian folklore and literature.

This collection of short stories is available in countless different editions. Try to find a nicely illustrated one if you can: some of the editions from the 1800s have beautiful imagery. Be advised that not all the original tales are necessarily for children: some are rather violent, and some contain rather risqué content!

Here are some very reasonably priced editions of One Thousand And One Nights from Amazon:

Wikipedia’s entries on Scheherazade, and on One Thousand And One Nights.

Image of Scheherazade via Wikipedia:  – Artwork in the permanent collection of The New Art Gallery Walsall, uploaded as part of a Wikipedian in Residency project.. Licensed under Public Domain via Wikimedia Commons.

1 thought on “Great short stories to read: One Thousand And One Nights”