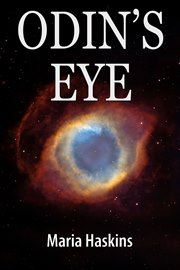 Here’s something I’ve learned about myself recently: one of the few things that makes me more uncomfortable than writing my own bio, is writing a synopsis of my own stories. Not so good when you have to do both those things for various websites and book-blurbs!

I really find it extremely difficult to describe my own writing (it makes me “tongue-tied” as a writer, if that makes sense) and part of me wants to groan “just read it!” as soon as I try it, but that’s not very productive I guess.

With that disclaimer out of the way, here is a basic, and very stripped-down synopsis of each story in my new ebook Odin’s Eye.

Mimir’s Well – A technician is dispatched to take on a powerful entity.

The Child – A mother faces a harrowing choice.

The Gates of Balawat – A corporate mission to a ruined city unsettles a young crew.

On Our Way – A woman tries to find a way out in a world haunted by destruction and loss.

The Man In The Grey Coveralls – A strange individual stalks a mother and her teenage son.

Lost And Found – A shipwrecked explorer clings to sanity on an alien planet.

Bethel – A convict confronts both her inner demons and brutal violence in a prison-facility on Mars.

The Settlers – A group of colonists tries to adjust to life in a brand new world.

Johnny B. Goode – An old man is hiding an ancient, and suddenly very sought-after treasure.

The twelve stories are not really connected, but they all fit into the same loosely constructed future universe, though I imagine that they might all take place far apart in both space and time. If you want to check out the whole book, you can sample and buy Odin’s Eye at various online retailers including: Smashwords, Amazon, Kobo, Barnes & Noble, and Apple iBooks.