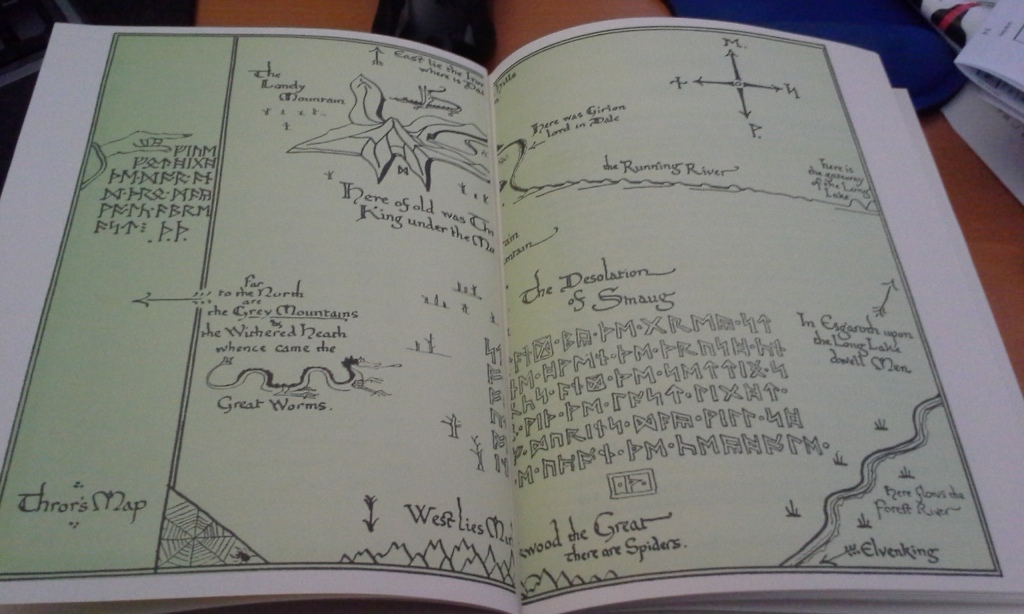 J.R.R. Tolkien’s book The Hobbit has been on my mind the last few days, ever since I watched the final installment of Peter Jackson’s movie trilogy based on that book. I won’t post my full review/rant here, but you can read it on my Tumblr-blog.

The Hobbit is not my favourite Tolkien book. That would be The Lord of the Rings. But The Hobbit is special in many ways, if you’re a fan of Middle-earth. This was the book that set Tolkien on the path to eventually write The Lord of the Rings. It’s the first book he completed that made use of the vast world, the incredible lore, the many languages and the long world history he had created over the years, and turned it into a story that connected with children and adult readers alike. And it did all this by telling an epic tale through the eyes of a hobbit, someone who was not a traditional hero or immortal being, but a bit of a homebody who found his courage (and his treasure!) along the way. This is a key thing: The Lord of the Rings could have been told (as are many of the stories in The Silmarillion, for example) through the eyes of elves and heroic men, but it would never have been as popular as the story told through the eyes of Frodo, Sam, Pippin and Merry.

The fact that we experience all these grand adventures, and see all these amazing places through hobbit-eyes is what really makes both The Hobbit and The Lord of the Rings work so well. These hobbits bring it all down to a level where we can connect with and understand the reality of what it would be like to be caught up in such an amazing tale. In the midst of dealing with trolls, dragons, wizards, nazgul and orcish cruelty, they worry about handkerchiefs, clean clothes, having a bath, second breakfasts, and dream of sleeping in their own beds again. Losing track of this hobbit-perspective, means losing track of what made these stories classics in the first place, and in my opinion it also reduces the emotional connection and the emotional payoff that Tolkien conveys in his books.

These quotes from The Hobbit have especially stuck in my mind these last few days, and have made me wish the movie had stuck closer to Tolkien’s story.

About the fate of Kili and Fili: “Of the twelve companions of Thorin, ten remained. Fili and Kili had fallen defending him with shield and body, for he was their mother’s elder brother.”

About Beorn’s crucial contribution in the final battle: “But even with the eagles they were still outnumbered. In that last hour Beorn himself had appeared – no one knew how or from where. He came alone , and in bear’s shape; and he seemed to have grown almost to giant-size in his wrath.

The roar of his voice was like drums and guns; and he tossed wolves and goblins from his path like straws and feathers. He fell upon their rear, and broke like a clap of thunder on the ring. The dwarves were making a stand still about their lords upon a low rounded hill. Then Beorn stooped and lifted Thorin, who had fallen pierced with spears, and bore him out of the fray.

Swiftly he returned and his wrath was redoubled, so that nothing could withstand him, and no weapon seemed to bite upon him. He scattered the bodyguard, and pulled down Bolg himself and crushed him.”

Finally, three quotes about and by the Elvenking, Thranduil. Changing his personality and character for the movie was obviously done to create dramatic tension, but I wish more of book-Thranduil had been allowed to show through. These quotes from the book show what I mean: