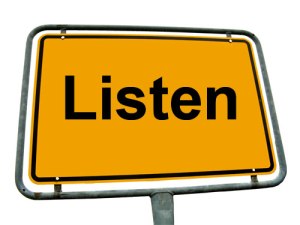 I have two kids. One never stops talking, and that’s the way it’s been since she was about a year old. She wakes up every day with stories to tell, and she spends the whole day telling those stories, barely stopping long enough to fall asleep.

The other child didn’t really say much at all until he was past three years old. He has speech delay and other issues with speech and language. These days most people are able to understand him when he does talk, and that’s a very big thing for him. Still, it often takes him a long time to put together a sentence the way he wants it to be. That didn’t always seem to bother him when he was younger, but now when he’s older I can tell that he sometimes gets frustrated with how hard it is to find the right words, pronounce them correctly and put them together with the right grammar to make a sentence that expresses what it is he wants to say.

But every now and then I stop to consider what it really means to be a child who has a hard time speaking. My talky child will tell me about every little thing that bugs her, creeps her out and scares her. She will tell me about everything she likes, and what she wants to do and what she doesn’t want to do. My less-talky child won’t do any of that as much, though he does it more than he used to do. But instead of talking, he might try to communicate all that stuff in other ways: sulking, throwing a tantrum, refusing to do things, getting angry or sad or upset.

Sometimes I have to remind myself to listen a little more keenly, to ask and re-ask a question I might not need to ask at all of the talkier child in order to get an answer, or to just pay a little bit more attention in order to understand.

If you can’t communicate well verbally it can make things very tough for you. Verbal skills are a huge factor in how people determine what they think about others. I believe that if you’re good at talking and communicating, people generally judge you by that skill, maybe more than any other and will probably overestimate your intelligence and general skill-level. If you’re not so good at it, people will probably underestimate you in a lot of ways.

In recent years, my non-talker has become a lot better at talking. For example, that means that he is now able to tell me (more often, if not always) what it is that upsets or bugs him instead of just freaking out. For a child that has issues with sensory stuff like certain noises, smells, and messy or chaotic situations, this is a huge thing.

Last year when we were flying to Sweden to see my parents, both kids had huge meltdowns in  Arlanda Airport when we arrived in Stockholm. We’d been on two flights, traveling for about 20 hours, had not had a lot of sleep, and now we had to hustle to our final flight of the day. Prime-time for trouble. My daughter was crying because I wouldn’t buy her a reindeer. My son was freaking out.in general, repeating over and over again that he wanted to go home. Finally I asked him why. Why do you want to go home? We just came this whole way. So why?

Answer: “Because it’s too noisy here and there are too many people.”

And he was right. It was too noisy and there were too many people. It was an insanely busy day in the domestic terminal and it was very chaotic and very stressful. And he was able to tell me that this was why he was upset. It didn’t make him stop freaking out, but it helped anyway. At least it helped me, because I was just so happy in the midst of that crazy moment that he had been able to verbalize what was going on for him.

Tonight we were at a restaurant having dinner and something similar happened again.

I’ve been very confused by how my son acts in restaurants. He loves food, and he seems to enjoy the whole idea of eating out. But often, as soon as we arrive in the actual restaurant, he becomes sullen and grumpy. This has totally baffled me. It has also annoyed the crap out of me on many occasions.

The grumpiness was definitely happening tonight again, so as I followed him to the washroom I asked him (yet again) what was wrong.

This time I got an answer. “It’s too noisy. The music is too noisy. And it’s coming from up there.”

He pointed at the ceiling. Like most restaurants this one had music coming through the speakers in the ceiling. And then I got it. I’ve seen my son be bothered by announcements coming through elevator speakers (in the ceiling), and even by the announcements at school (from ceiling speakers again). So maybe that’s it. Maybe that’s why he gets grumpy when we go out, because something about that sensory experience with sound coming from some undefined place above, is just messing with his head. He likes the food, but he hates the noise. Which would also explain why he generally does better in outdoor eating settings.

This post was originally posted at my personal blog: Kids. Food. Life.